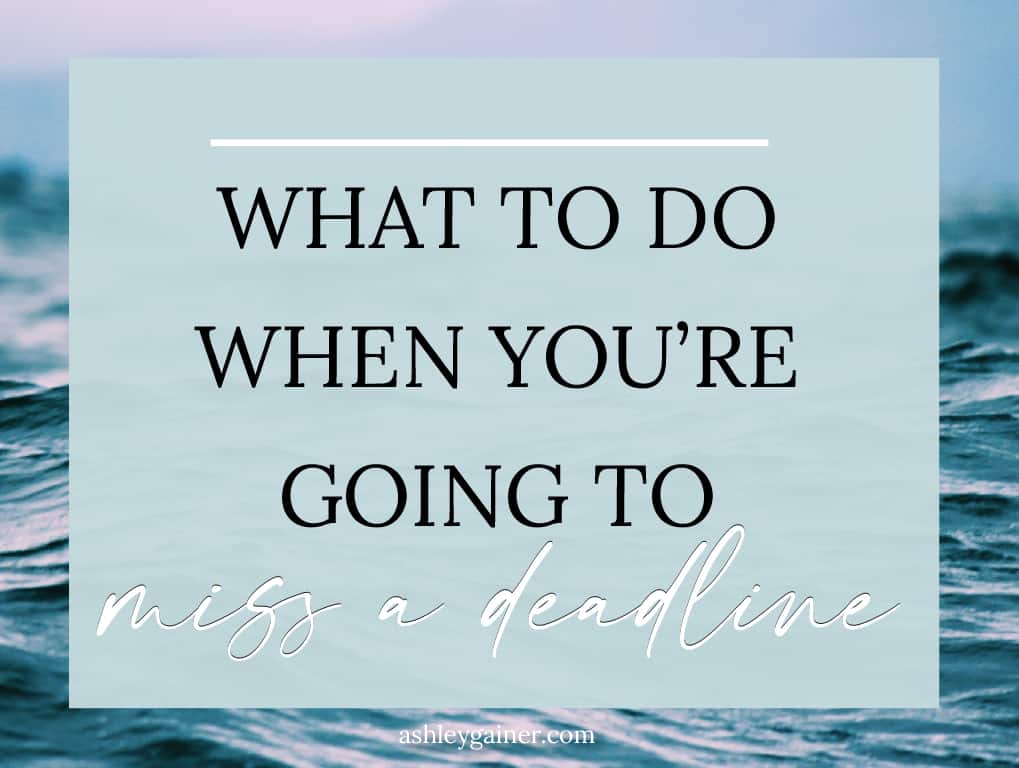 7 Things To Do When You Miss A Deadline

Nobody wants to miss a deadline, but what do you do if you’re facing that particular reality? I don’t have a ton of experience, but I have missed a deadline or two over the past 12 years… and I’ve had a lot of deadlines missed on me, as well.

With all those experiences in mind, I’m giving you 7 things to do when you realize that you, too, will not make that deadline. #7 is the most important one!

1. Don’t panic when you miss a deadline

This is urgent, but don’t panic. Yes, you’ve got to make some moves, but nobody’s going to die. This isn’t a reason to go ballistic or blow up your entire life. Try to keep a clear head.

There is that moment of heart-pumping adrenaline panic and ringing in your ears — that’s natural to feel. “Oh my gosh, I totally messed up!” Or, “I’m really, really nervous about this!”

Maybe you see the deadline coming and things aren’t happening soon enough so you’re going to miss it. Or, there’s something you forgot about. Or they asked, “Hey, where’s this thing?” And you’re like, “Uh-oh…”.

The surprise “thing that I forgot about” is maybe a little bit more panic inducing, but either way, this is not a comfortable situation. Just remember that nobody’s going to die.

2. Look at the contract

If you have a contract in place, see what the contract says. Does it say anything about what happens if a milestone or deadline is going to be missed? Are there late fees? Is there a penalty? Is there someone to contact?

They don’t always say. But if yours does say anything, you know the next steps that you’ll need to take. For more on why I think working with a contract is a good idea, see my post “8 Red Flags You Shouldn’t Ignore With Prospective Clients.”

Let the client know ASAP with a realistic estimate of when the work will be in.

This might be the hardest part for a lot of people. You have to tell the client either that the work isn’t going to come in on time or that you’ve already missed the deadline. And you have to tell them when they can expect it.

You can’t just disappear. Don’t be that freelancer. There are so many freelancers out there who disappear when things don’t work out. No one hears from them again. Then the client is confused and maybe a little bit angry and you look like a weirdo.

You’re really shooting yourself in the foot, since people who hire freelancers share names with each other. Don’t ghost a client just to avoid having a difficult interaction.

Nobody wants a mean email, but it’s not like people are going to come and set your house on fire or cut the brake line in your car. So let them know as soon as you realize that it’s late. If you have a noon deadline and you forgot about it until 9 am, tell them you can get it to them by 5 pm that day, but not by noon. Tell them at 9 am!

Clear your schedule to get the assignment done. If it’s not something that will keep you alive, it doesn’t need to be done right now. You’re allowed to go to the bathroom. You’re allowed to pick your kids up from school if you can’t find someone else to pick them up.

But everything else gets shoved to the side until you get this thing done if the deadline is your fault. If it was a matter of you waiting on stuff from them and they didn’t get it to you, then the client has responsibility, not you. But if this is your responsibility and you’re the one who goofed, clear your schedule and get it done.

5. Bring in help if you miss a deadline

Bring in reinforcements (in work or home) to help you get it done. This could mean calling grandma to see if she can pick up the kids from school, or ordering takeout so you don’t have to think about dinner. That way you can spend that extra hour and a half finishing this project. Perhaps bring in a babysitter, or subcontract a writer who can write it for you on a quick turnaround.

Yes, there’s some expenditure involved in most cases, but that can be a consequence of messing up. And the expenditure is usually not something that’s going to overwhelm you.

For example, if you bring in a junior writer for $100, and you’re getting $150 for the project, you’re not losing money, but you’re probably not going to come out ahead either. But you messed up, right? Things aren’t going to necessarily end perfectly.

If you mess up, it’s especially important to bring in reinforcements if this is an urgent deadline and if the client is really unhappy with you and it’s important to you to make them happy with you. If the ads are set to launch in 2 hours and you’re going to miss the deadline, that’s when there’s real urgency. That’s when you need to bring in reinforcements to get it done on time or as close to on time as you possibly can.

Apologize and own your stuff but don’t take abuse. If you aren’t sure how this client is going to react, or if you know that they’re going to have a negative reaction, then brace for impact, but definitely don’t take someone else’s abuse.

It’s okay for them to be frustrated, disappointed, and sad. It is not okay for them to insult you, mistreat you, make threats, or do or say other horrible things. Someone being angry with you is not the same thing as someone mistreating you.

Own your stuff. No, don’t be defensive when you screwed up, but also don’t take someone else’s abuse.

The most important thing is to figure out what went wrong so that you can avoid it happening again. Ask yourself how it got messed up and how you should save this type of situation in the future.

I have a free Facebook group, The Ink Well Guild with Ashley Gainer. Come check it out at theinkwellguild.com. Join other freelance writers who are living the laptop life! 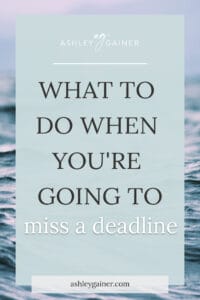 Posted in business, freelancing, time management
We use cookies on our website to give you the most relevant experience by remembering your preferences and repeat visits. By clicking “Accept All”, you consent to the use of ALL the cookies. However, you may visit "Cookie Settings" to provide a controlled consent.
Cookie SettingsAccept All
Manage consent