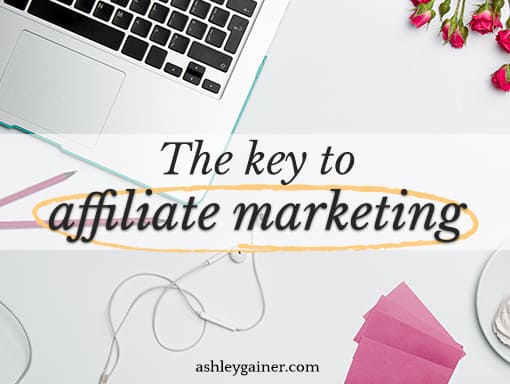 Today’s post is a little bit different than what you’ll typically find. I’m going to pull the curtain back a little bit and show you something that’s been going on behind the scenes. Don’t worry — nothing too scary, I promise!

It should be no surprise to you that some of these links are affiliate links, given that this is a post about affiliate marketing.

I recently crossed off a major business goal

I’m really excited to share this with you today, because I’ve had this specific goal on my “to achieve” list for going on 2 years now.

Kinda pitiful in a way, but let me explain.

I made my first affiliate sale.

Some of you know what a big deal this is. Some of you don’t have any idea what I’m talking about. And some of you are probably rolling your eyes (the way I did for the longest time.)

So let’s break this down for a minute.

What’s an affiliate sale? In short, it means that I agreed to share someone’s product in exchange for a portion of the proceeds from the sale. The process of promoting my personal link to someone else’s product is called affiliate marketing.

Affiliate marketing gets a huge hype in the blogosphere — especially in my circles, which are all about personal finance, entrepreneurship, and making money online. And the hype falls on both sides of the coin — some people love it and some people loathe it. 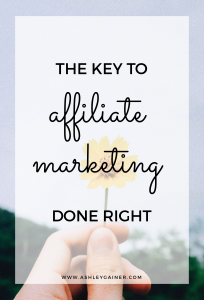 The problem with affiliate marketing

Affiliate marketing is, by nature, commission-based. And we, in general, tend not to trust people who are recommending something when there’s something “in it” for them.

This type of marketing — same as every type of marketing, really — has a ton of baggage attached. For some people, it feels sleazy. For some, it practically begs for the reader to question the affiliate’s integrity. Are you recommending this to me because it’s actually awesome, or are you recommending it to me because you get 40% of what I fork over?

It’s a legitimate question. And that question of integrity is something I never really wanted to invite for my own business, despite the fact that I have personal friends making 6 figures in large part due to affiliate marketing.

What I learned about affiliate marketing

One of these friends in particular is a fantastic blogger who has worked hard and turned her blog into not only a robust, thirst-quenching resource for a broad swath of people (people like me, in fact) — but she talks about the benefits of affiliate marketing and even shows how she uses it.

The core element of her strategy is to only promote things she really thinks are valuable.

This is a principle I internalized when I sort of tap-danced around affiliate marketing for years.

I never wanted to “pitch” something to my readers that I couldn’t 100% stand behind, and I never wanted to do anything at all that would violate the trust I try to build every day around here.

It felt like a potential minefield, and so I stayed away from it, for the most part.

Despite my general aversion to promoting other peoples’ stuff for my own gain (which is how it sometimes felt!), I also know a lot of people who are doing great things online, and I want to spread the word. And if I’m sharing great resources with my audience — resources I really love and use and enjoy myself — is there actually something wrong with getting some credit for sending buyers?

It was a mental conundrum, and one that I never really resolved. So I had “make my first affiliate sale” on my list of goals for 2015, and again for 2016, and then again for 2017. To be honest, I didn’t really think I would ever take this “goal” seriously enough to actually accomplish it, but I wasn’t ready to completely write off affiliate sales for good.

And then I found something I couldn’t NOT share

The best affiliate marketing, it turns out, is done when you are so completely enthusiastic about something that you’re practically bubbling over and wanting to shout about it from the rooftops.

So when two of these “somethings” hit my desk around the same time, I couldn’t not share them with my readers. I thought they’d be two fantastic resources and I really, really wanted to recommend them.

They both had affiliate programs attached, too. So I decided to sign up and see what happened.

A little bit of information about these two products:

Drafting the “affiliate” email and getting the results

I’ll be honest: I was nervous to email my list about these offers! But I knew I couldn’t NOT share these two fantastic resources. So I decided to be very up-front in my approach, let them know right off the bat that I was plugging two specific products in that email and that I was not about to become an affiliate hawker but that I really thought these were worth sharing.

Then I laid out each of the ebooks, why I was sharing them, why I thought they might be worth checking out, and where to learn more about them.

I closed the email by asking them if they wanted to see more recommendations from me — and you know what? I got a ton of replies to that message saying YES! That really surprised me, but it also gave me a tremendous amount of freedom. It tells me that my readers trust me and believe me, and they’re happy to hear about things that I think are awesome even if I’m not the one coming up with them.

That was really exciting, but the real milestone I reached that day was when the first person bought something. I’d made my first affiliate sale!

All told, I made 6 sales, which was a great feeling. That meant that I was onto something about what my readers needed and wanted from me. Turns out they’re really interested in saving money and being at-home moms, and not so much interested in going to Disney World even if they can do it with 30-50% savings. We can’t all be obsessed with The Mouse, I guess.

If you want to get numbers-y, we can do that. I wasn’t in it for the numbers, BUT my conversion rate was about 3.8% on one of the offers, which by many standards is pretty darn good. I personally thought that particular offer seemed like an extreme no-brainer and I guess I was right, because about 85% of the people who clicked on that particular link ended up buying. I knew the other offer was a long-shot in part because of how super-niched it was and in part because the price tag was substantially higher, and I was right about that too because twice as many people clicked on that link but nobody was interested enough to purchase.

There aren’t really any plans in the works for more affiliate marketing.

I haven’t really sent out anything else yet, and I don’t plan to do a ton of affiliate marketing in general… but I also know that when I do come across something that I think my readers will really like, I don’t have to be nervous about sharing it. I can just share it the way I’d share something with a friend. I’m guessing that’s why it wasn’t such a huge turnoff — first, I kept things really above-board and made it clear that I wasn’t about to hard-sell something, and second, I made it as natural as I could. No “sales copy” or “techniques” or “templates” to “optimize my conversion rate.” Just a simple message saying “hey, I really liked this stuff, and I think you might, too.”

All in all, my affiliate marketing experiment really was more of a test than an actual strategy, and I’m really glad I did it. I do get a little bit of income from the ebooks that sold — not a ton, but enough to take my kids out for ice cream. So there’s that, but what I’m more excited about is the fact that I understand my audience a bit better, and in ways I probably never would have known if I hadn’t tried this.